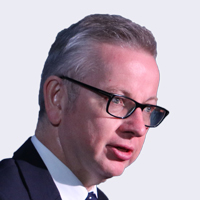 Secretary of State for Environment, Food and Rural Affairs (DEFRA)

It is a horrifying thought that just during my lifetime – since the start of the 1970s – well over half of all mammals, amphibians, reptiles and birds have disappeared from our planet.

Habitats have been destroyed through climate change or deforestation, and vulnerable species hunted to the point of extinction by poachers.

Losses like this can’t go on. We must tread more lightly on the planet, stop hacking at the roots of the tree of life, and pass on to our children a healthier, more bountiful, natural world.

It’s a vital message, and thanks to this ‘Protecting our Wildlife’ campaign, it’s one that many more people will hear in coming months.

In the government’s 25 Year Environment Plan we set out our ambitions – which will be reinforced in our forthcoming Environment Bill – to protect and enhance our landscapes and seascapes, and the wildlife that relies upon them for theirsurvival.

Illegal wildlife trade is worth up to £17bn a year

The plight of endangered species, and tackling the organised criminals who prey upon them, are a particular priority. In vulnerable communities around the world, poachers zero in on the rarest animals, trees and plants before sending their illegal haul across continents to satisfy global demand.

This illegal wildlife trade is both abhorrent and lucrative – thought to be worth up to £17bn a year – and we are in the forefront of international efforts to tackle it.

At the London Illegal Wildlife Trade conference in October last year, supported byHRHthe Duke of Cambridge, we welcomed over 70 countries and more than 400 charity and conservation groups, and urged them to commit to finding new ways to tackle this moral and environmental scandal.

Cutting ivory trade by a third by 2020

For our part, when our domestic ivory ban comes into force later this year, it will be one of the toughest in the world – ensuring a complete end to commercial dealing in elephant ivory with only limited and carefully-defined exemptions.

We will use this ban, backed by legislation, as a platform to lobby for further action to protect iconic species. The newly-created international Ivory Alliance 2024, which I have the honour of chairing, aims to cut the poaching of elephants for their ivory by one-third by 2020, and two-thirds by 2024. Through the IWT Challenge Fund, meanwhile, the UK has invested £18.5 million in over 60 projects.

The international community is also playing its part. News that Laos had committed to a total ban on ivory was one of the highlights of the London conference. We were also delighted by the announcement that the US will fund projects to counter wildlife trafficking to the tune of over $90million in the coming year.

International co-operation is vital. Building on successful deployments in Gabon and Malawi, the UK is putting £900,000 of new funding into developing a British military counter-poaching taskforce. Its members will train African park rangers in more effective and safer counter-poaching techniques as they seek to disrupt those who would kill elephants – a magnificent keystone species – simply for their ivory.

Some 65 countries signed up to the London declaration – an important symbol of international co-operation, and of our determination to stamp out the illegal wildlife trade. For good.