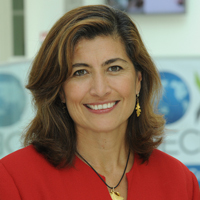 OECD Chief of Staff and Sherpa to the G20

Gender stereotypes abound in education, careers, social media, TV and film. To level the playing field, we have to change society’s traditional view of women.

In this day and age, the most surprising thing about the gender gap isn’t that it’s so wide. It’s that we should have one at all. But, nevertheless, it exists — and for a variety of reasons, notes Gabriela Ramos, OECD Chief of Staff and Sherpa to the G20, whose brief includes overseeing work on education, employment, labour and social affairs, including gender.

“It’s true that many women still bear the brunt of childcare, family care and elderly care, and don’t always have linear careers,” says Ramos. “But the reality is that we also face discrimination. So, we have to level the playing field because, yes, women are the ones who carry children, but there’s no rule that says we’re the only ones who should care for them after they are born. Expectations of what women should be doing with their lives can be barriers to successful career development.”

So, for that matter, is a lack of transparency around the issue of pay. We desperately need to close the gender pay gap. But Ramos points out that pay levels are, in many instances, still decided behind closed doors.

“That’s why it’s good to know that several OECD countries have instigated initiatives that enforce wage determination transparency,” she says. “Again, it’s true that women sometimes go into occupations that are less well-paid, and may have to work fewer hours, which has an effect on their wages. But — and this comes back to my point about discrimination — women are also less pushy when negotiating their salaries.” And, she admits, women aren’t always comfortable with putting themselves forward for promotion, either. Being assertive can, literally, pay dividends.

Gender stereotyping is holding women back, too, she says — and this starts at an early age. “If parents are always telling girls, ‘That sport is for boys! Don’t climb trees! Don’t take risks!’ then how can we expect to develop the strong female entrepreneurs of the future? We still have a very traditional view of what women should and should not do.”

Take STEM subjects and careers, which have depressingly low female representation because it’s generally assumed by parents and teachers that this is a ‘male’ field, so women need not apply. That ‘men only’ notion has to change, says Ramos.

“First, we need to recognise that we have an issue,” she says. “We can’t do anything until we face facts. Then we need to launch initiatives to encourage girls into STEM subjects, just by letting them know that they can do it. We bring female role models into schools — astronauts, pilots, engineers, scientists, etc — and let the girls talk to them. And when that happens, I can tell you: it’s amazing. We also need to change textbooks, so they are free of gender bias.” Some of this work is happening now on a small scale, says Ramos — but much more needs to be done, particularly in IT where the gap is especially large. Women have to be invested in the digital future, she says “because it is the future.”

Issues with stereotyping in social media

To close the gap, other areas of society also need to change their ideas about the representation of women. In TV and film, for example, women are rarely the sole protagonists. “They are not usually portrayed as being successful in careers and are generally seen in mother roles,” says Ramos. She also pinpoints issues with the mainstream media and social networks. “On social media, there is huge pressure on girls to conform to norms about how they should look and feel. This is an area that needs more research, which we are doing at the OECD, but we know that girls — and boys — feel bullied on social networks. And with girls, it’s always about their image.”

Finally, women need encouragement from their families and teachers to achieve their dreams. “I talk to women who have reached the top of various organisations, and they tell me: ‘I had family who encouraged me and told me I could do it. They told me there were no limits.’ If you tell a girl, ‘you can do it’, it makes a lot of difference to her self-confidence. And I include myself in that.”