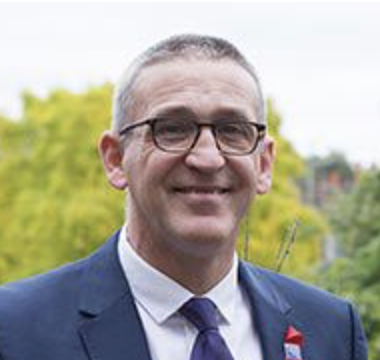 Ian Green’s life is testimony to medical advances in HIV support, but stigma surrounding the condition continues to prevent thousands from accessing the support they need.

I’ve lived with HIV for 20 years

“In 1996, I was diagnosed with HIV. I was 31 and at most I thought I’d have about eight years,” explains Green, Chief Executive of the Terrence Higgins Trust.

Now, happily married with a successful career, Green’s life expectancy is that of any man his age. Thanks to the development of new drugs, his viral load has been reduced to an undetectable level, which means he can’t pass the virus on to anyone.

I was 31 and thought I’d have about eight years to live.

However, while there have been life-changing medical advancements over the last 20 years, society’s view of HIV and AIDS remains riddled with myth and stigma. “One reason is that we’ve not had a major public awareness campaign since 1987,” he explains – referring to the national TV ad and leaflet campaign of the late 80s, which showed the word AIDS emblazoned on a tombstone.

There are so many options to get HIV tested

“There are so many options, you can now get tested in church, in gyms and even at home through self-test kits. We need to be giving people the widest possible array of choices.”

There have been life-changing medical advancements in the last 20 years, but society’s view remains riddled with myth.

With an early diagnosis, life can continue with relative normality. “When I was diagnosed, I was one of the first to be put on a trial for anti-retroviral drugs, but the side effects were awful – diahorrea, night sweats and nausea. Now I’m on three tablets a day – some people need only one – and there are no side effects,” continues Green.

The changes have not just been physical, but also psychological. “When you have HIV, you start self-stigmatising. For so many years, I was told I was a risk to society. Now I know I’m not a risk to anyone, but it takes a while to unpack that and rebuild your life and self-perception.”

Through his work at the Terrence Higgins Trust, Green wants to ensure that quality care is accessible to absolutely everyone. “We want people not only to live well, but to thrive,” he explains. “We also want to amplify the voice of those living with the condition and anyone affected by it.”

You start self-stigmatising […] I’m not a risk to anyone, but it takes a while to rebuild your self-perception.

“Ultimately, we want to see an end to HIV transmission in the UK.”

20 years ago, few believed that was possible, but Public Health England have just released figures to show the biggest ever drop in new diagnoses – with a decline of 18 per cent between 2015 and 2016.

We clearly have the tools and the knowledge to ensure this trend continues, what we now need is a change in attitudes to ensure those who need help aren’t scared to seek it.