Pictured: Hyderabad’s distinctive auto-rickshaws carry posters displaying anti-TB messages through the city’s winding streets. India has one of the highest burdens of TB in the world. 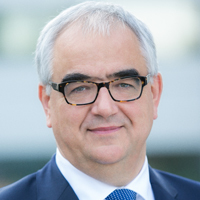 Why is it important for pharmaceutical companies to focus on HIV and TB?

We cannot be complacent about HIV because it’s far from over. Therapies are good at controlling HIV, but patients must take them for the rest of their lives. It is difficult to be compliant with medicine for such a long time, so a lot of work needs to be done to make treatment more manageable and reduce the potential for drug resistance. And, also, could a HIV cure be generated?

Tuberculosis is causing an enormous public health problem, mainly in low and middle-income countries. Scientifically, TB is a very interesting space because trying to solve antimicrobial resistance (AMR) and multi-drug resistant TB (MDR-TB) could lead to new TB treatments and the development of new medicines in other fields. Companies need to approach it with open minds.

How optimistic are you that a HIV vaccine will be developed? And what impact could it have?

The first HIV vaccine, which was tested in Thailand, showed efficacy of 31.2%, which demonstrated that it is technically possible. The question now is: ‘Can we develop a vaccine that delivers more than 50%, or more than 80%, or close to 100% protection?’

If we could, what would the impact be? Well, epidemiologists say that a HIV vaccine with 50% efficacy would have an impact on the HIV infection curve. Of course, we want to do more than that and get to north of 70% or 80% protection. I think a vaccine could be a very effective tool for controlling HIV infection in the world — but getting there is going to be step by step process.

What else needs to be done to end HIV/AIDS?

Every innovation that can be generated to help stop HIV infection is important, from the likes of an antiretroviral vaginal ring currently under regulatory approval to long-acting injectable antiretroviral treatments. We should not discard any of these technologies, because the world will need different protection methods for the next ten, twenty, maybe thirty years. But we also need a vaccine that offers protection.

It is also important to prevent people from getting HIV; and that, of course, is done by educating them to ensure they understand how infection occurs — and what they need to do to protect themselves.

What scientific innovations have been made in the fight against TB in recent years?

We are in dire need of more innovation regarding TB, although there has been some progress which I find encouraging. There have been diagnostic improvements, for example, and several new therapies. The TB Drug Accelerator Program, supported by the Bill and Melinda Gates Foundation, is speeding up drug discovery. So, the field is not ‘dead’ — but it is not like cancer treatment where there are thousands of new medicines in evaluation at any one time.

Why has TB science been overlooked?

There is quite effective therapy for drug-sensitive TB — although it needs compliance and good implementation. Multi-drug resistant TB and extensively drug-resistant tuberculosis (XDR-TB) is another story. These are extremely difficult to treat, sometimes requiring twenty-four months of therapy on toxic and challenging medication. MDR-TB and XDR-TB are largely found in the developing world where the market is challenging. It is very difficult in a free market to say to companies: ‘Why don’t you spend the next ten years developing an XDR-TB drug?’ But the problem is, if TB is not diagnosed correctly and then treated quickly, we cannot cure it — so it continues to spread and becomes more expensive and difficult to address. Technically, scientifically, it is possible. More effort is needed to get there.

How important is it that companies invest in these spaces?

When I worked in Africa at the start of my career, the HIV epidemic was at its height and patients in hospital typically did not survive for more than six months. Now people with HIV can live ten, twenty or thirty years or more if they take their medicine. They can see their children grow up. Twenty years ago, when mothers died many, many children were left on their own. Now we have a much more stable society and I think that is a huge victory for medicine and science.

So, it is very important that companies invest in these spaces. On the other hand, industry cannot solve HIV and TB on its own. What is needed is collaboration between industry, governments, academic centres, NGOs, institutions and others. And to attract them to this environment they need to be given some kind of incentive.